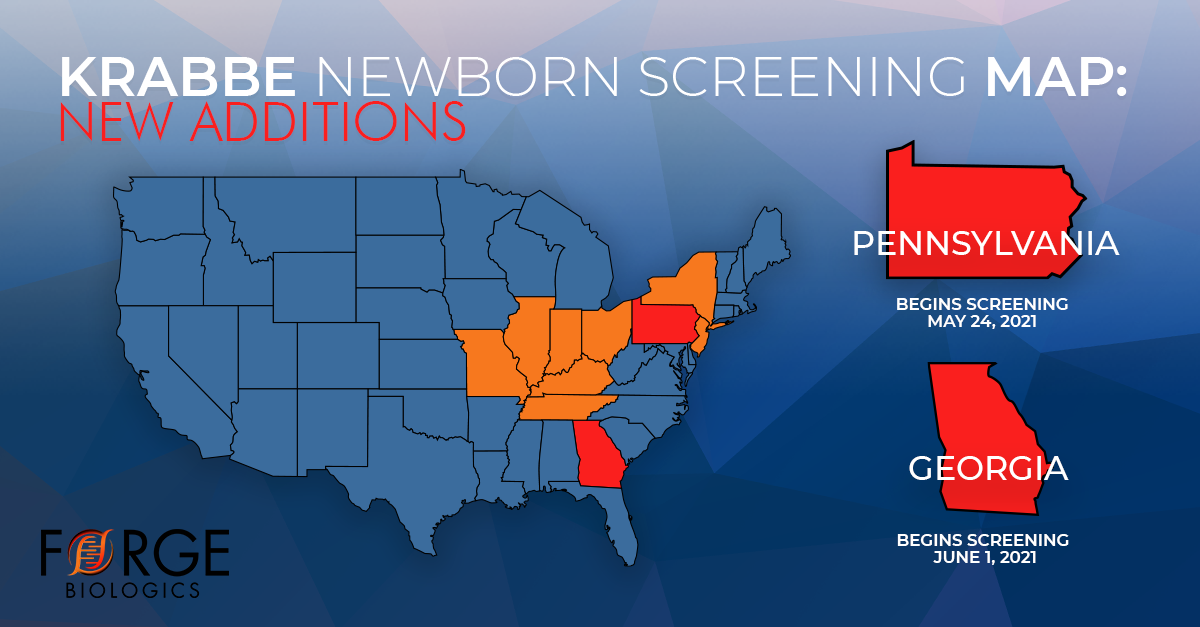 On May 24, 2021, the state of Pennsylvania became the 9th state in the United States to add Krabbe disease to their Newborn Screening (NBS) program. On September 1, 2021, Georgia will become the 10th.  Forge Biologics congratulates these states and the teams that led this initiative as early intervention for Krabbe disease is crucial in saving patients’ lives.

Newborn screening background
Newborns in the U.S. and other developed countries are routinely screened for several diseases.  Most states screen for the majority of conditions included on the Recommended Uniform Screening Panel (RUSP).  Krabbe disease is not on the federal RUSP, but patient advocacy groups have successfully lobbied to have it added to certain state-level NBS programs, including New York, Illinois, Indiana, Kentucky, Missouri, Tennessee, New Jersey, and Ohio. Efforts to expand NBS exist in a handful of other states.

New York was the first state to begin screening for Krabbe disease in 2006.  NBS implementation became possible after Dr. Maria Escolar’s ground-breaking publication in The New England Journal of Medicine in 2005, describing the improved outcomes of babies with infantile Krabbe after hematopoietic stem cell transplant (HSCT), which is currently the standard of care. Dr. Escolar, Forge’s Chief Medical Officer, has since pioneered a novel gene therapy that compliments the HSCT treatment to address the progression of disease. This potentially life-saving therapy is being made available to patients through Forge’s FBX-101 RESKUE clinical trial (more details below).

Why is newborn screening for Krabbe disease necessary?
Krabbe is a rare and serious disorder that can cause the protective layer around the nerve cells in the brain to weaken, generally leading to death by age two if untreated.  It affects about 1-2.5 in 100,000 people in the U.S. Doctors have had some success in treating patients with Krabbe, but treatment must begin as early as possible so the NBS process is imperative.

What does the Krabbe newborn screening test for?
NBS tests for low galactosylceramidase (GALC) and high psychosine. Krabbe disease is caused by loss-of-function mutations in the GALC gene, an enzyme responsible for the breakdown of certain types of lipids such as psychosine. A buildup of psychosine is toxic to nerve cells, eventually killing them and leading to the breakdown of the nervous system. Timing to detect these levels is critical; a delay in starting any potential treatment can affect the outcome. If Krabbe is suspected, patients should be immediately evaluated at a transplant center for transplant eligibility during which additional genetic and neurological testing can be completed.

Forge Biologics is committed to supporting early screening efforts so that testing for Krabbe will one day be included in all NBS programs. To advance Dr. Escolar’s discoveries, Forge also launched the FBX-101 RESKUE clinical trial earlier this year. The RESKUE trial is a phase 1/2 first-in-human gene therapy clinical trial for patients with Krabbe disease which aims to solve for the peripheral neuropathy progression of the disease not addressed by HCST. Learn more here.